Search speed is controlled by the NPS parameter.  At weaker playing strengths, low search speed prevents MadChess from “seeing” too many moves ahead, causing it to overlook tactical sequences.

The severity of move errors is controlled by the MoveError and BlunderError parameters.  If MoveError or BlunderError is greater than zero, MadChess performs a MultiPV search and randomly selects the best move or an inferior move.

MoveError and BlunderError is specified in centipawns, which is 1/100 the value of a pawn.  How is a position scored in fractions of a pawn when piece values typically are scored as whole number multiples of a pawn (knight and bishop = 3 pawns, rook = 5 pawns, queen = 9 pawns)?  When MadChess assigns a score to a position it considers material (pawns and pieces) but it also considers positional factors such as pawn structure, piece location and mobility, and king safety.  These positional factors are scored in fractions of a pawn.

How does MadChess calibrate its playing strength to an arbitrary ELO?  First, MadChess sets various positional parameters on or off based on ELO level.  For example, at less than 1000 ELO, MadChess values knights and bishops equally, misjudges the danger of passed pawns, and misplaces pieces.  Second, MadChess calculates four search parameters using a non-linear equation.

You may examine the value of positional and search parameters for a given ELO by enabling the UCI Debug option.  MadChess will display all parameter values in your GUI’s engine output window. 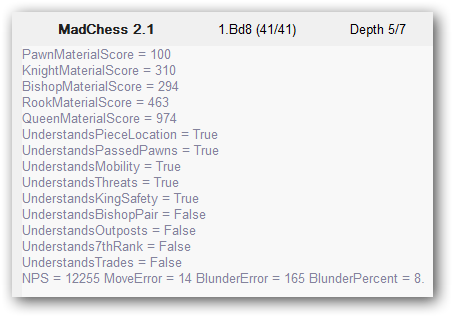