I played an entertaining game against MadChess a few evenings ago. Prior to the game, I adjusted MadChess’ strength reduction parameters because I felt their values caused the engine to play too strongly for a given Elo rating. Perhaps my adjustments made the engine too weak. I’m using “feel”, a very unscientific process. Nevertheless, I enjoyed the game.

Here I missed a tactic. Can you spot it?

I didn’t see it. The tactic is available on this move and my next three moves because MadChess didn’t “see” the tactic either. See Search Speed for an explanation of how MadChess’ strength reduction algorithm affects the engine’s “sight”. 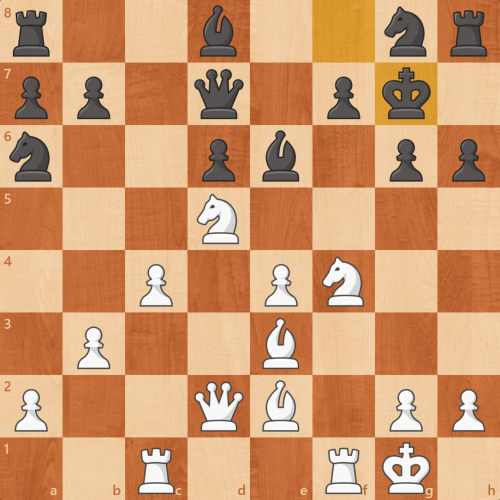 Material is even, but clearly I’m winning. However, winning “won” games at blitz time control is not guaranteed at my patzer skill level. There’s always a chance I blunder material back to my opponent. Or run out of time. Pushing those concerns aside, I pressed my advantage, didn’t make any egregious errors, and managed my time well.

After I won the game, I gave Komodo Dragon two seconds per position to analyze the game. I then played through the game with Komodo Dragon and MadChess running at full strength, each displaying four best moves (MultiPV = 4). I explored a few variations where I didn’t understand why a particular move didn’t work, consulted the engines, and added refutation lines and comments to the game. 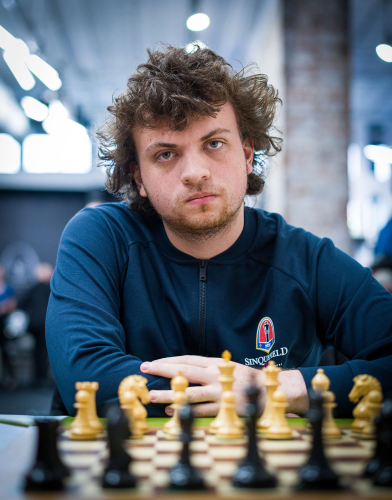 Hans Niemann at the 2022 Sinquefield Cup.

The report includes several tables and charts of statistical evidence, a description of Chess.com’s cheat detection system, along with numerous emails between the Fair Play Team and Hans. In his email responses to questions asked by the Fair Play Team, Hans confesses to cheating online.

Regarding Hans’ game against Magnus Carlsen at the 2022 Sinquefield Cup, the Fair Play Team states, “In our view, this game and the surrounding behaviors and explanations are bizarre… However, we are currently unaware of any evidence that Hans cheated in this game, and we do not advocate for any conclusions regarding cheating being made based on this one encounter.”

In our view, [the Niemann – Carlsen Sinquefield Cup] game and the surrounding behaviors and explanations are bizarre.

The report stresses Chess.com’s cheat detection system was built to detect cheating in online play, not over the board (OTB) play. Nonetheless, regarding Niemann’s rapidly rising FIDE Elo rating, the Fair Play team states, “his results are statistically extraordinary.” With regard to OTB cheat detection, the report states, “Chess.com has historically not been involved in OTB or classical chess fair play decisions, as we do not run OTB or classical chess events… We have shared our findings with FIDE and will cooperate with any investigation or requests they pursue. It is our belief that OTB event organizers should be taking much stronger precautions against cheating by all players to ensure fair play.”

I posted the following comment on the TalkChess forum.

My Thoughts (Posted on TalkChess)

[Hans] seems to be playing a character: the wild-eyed, misunderstood genius who cannot suffer fools and is impatient with the unimaginative, bourgeois chess establishment.

Whether this is based on…

… is unclear to me at this time.

I read the entire Hans Niemann Report. I am leaning towards explanation #2. The evidence of Hans cheating online is damning. As a consequence, I question the man’s motivations. Does he want to improve his skill or does he want attention and adulation? On the other hand, the over the board (OTB) evidence demonstrates serious abnormalities but is not conclusive.

I just can’t get past the man’s cocky attitude, snarky interviews, and rage and bravado. I can’t reconcile it with his incoherent post-game analysis. Especially when compared to Vassily Ivanchuk’s famous post-game analysis of an entire game completely from memory with no visual board to prompt him. I’m skeptical that Hans’ zest for put-downs and reticence to discuss details of his OTB thought process are simply an odd personality quirk or a manifestation of some-can-do-but-can’t-explain.

It’s looking more and more likely he simply shifted arenas for his devious conquest from online to OTB. Perhaps for vengeance, fame, money, or a taste of each. Or maybe just for the amusement of punking us all, satisfying some psychological need known only to provocateurs, as I suggested with my earlier reference to Andy Kaufman.

Having achieved a respectable degree of proficiency professionally and in my chess engine hobby, I have come to appreciate the hard-won knowledge earned by a long slog up the learning curve. I respect expert opinion. So I find it exceedingly difficult to toss aside the concerns of Magnus Carlsen, Ian Nepomniachtchi, Fabiano Caruana, Hikaru Nakamura, and other high-caliber players who have stated or insinuated there’s something suspect with Hans’ chess. It’s erratic, disjointed, alien.

I realize what I’ve expressed here is subjective opinion. While I spend most of my professional time and energy on more objective matters of software development, I live in a world of human beings. In my experience it’s personally and professionally valuable to form opinions of people’s character. I- we all- must navigate their idiosyncrasies, disguised motivations, veils of personal mythology, calculations of political expediency, etc.

I’d stay the hell away from a character like Hans Niemann.

Follow discussion of the report here: Carlsen Withdrawal After Loss to Niemann. 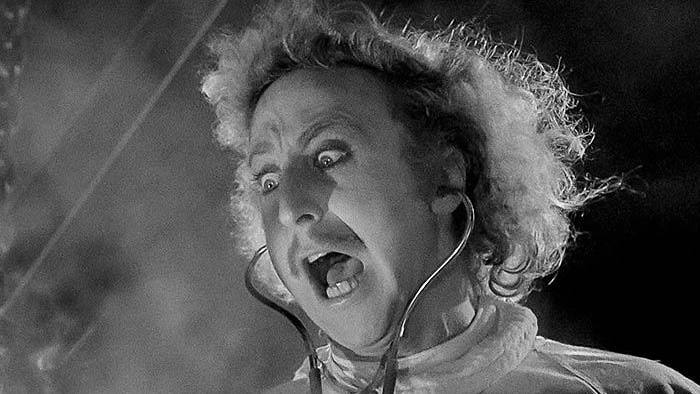 I had a Frankenstein moment yesterday. I use the word “Frankenstein” in reference to MadChess. Meaning, I’ve used my powers of concentration to create this thing, a chess engine, by imagining, thinking, then writing code to “teach” it to play a game of chess. This thing becomes terribly powerful. It’s capable of playing the game I “taught” it with the strength of a super Grandmaster, far exceeding my abilities.

While I’m glad I can use MadChess to analyze my games against Internet opponents (after the game is complete, of course), and rely on MadChess’ suggested improvements and variations (it is a Grandmaster after all), it would be nice to play a game against it. For that to be enjoyable, though, I must handicap MadChess so it plays weaker and gives me a fighting chance to win.

The Universal Chess Interface (UCI), a protocol supported by chess applications that enables users to connect the application to any chess engine, supports handicapping an engine via the UCI_LimitStrength and UCI_Elo options. The user selects a playing strength (Elo rating). It’s up to the engine’s author to determine how to simulate weak play at the specified Elo rating.

In MadChess’ source code, I accomplish this via four techniques:

So I’m playing a 5m + 5s blitz game against MadChess. I’ve handicapped MadChess by limiting its strength to 900 Elo. As the author of the engine I know this implies MadChess will blunder on approximately 11% of its moves. This blunder can be as severe as approximately 400 centipawns, which is greater than the value of a knight or bishop. I know this because I wrote the code and devised the handicapping formulas. 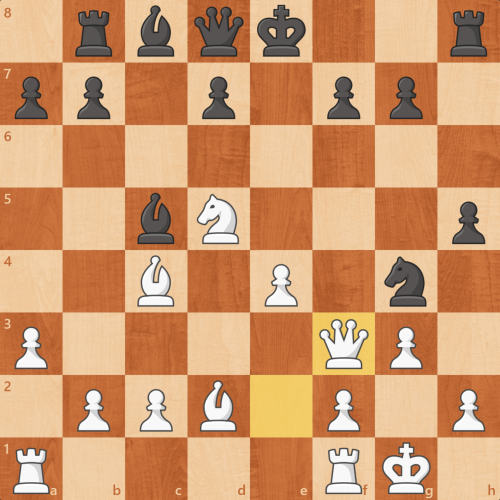 I’m up a pawn. Now MadChess threatens my queen and light-squared bishop via 18… Ne5. I evade the threat to my queen and protect my bishop by playing 19. Qc3, eyeing black’s undefended knight on e5 and pawn on g7. MadChess persists, threatening my queen again via 19… Bd4. 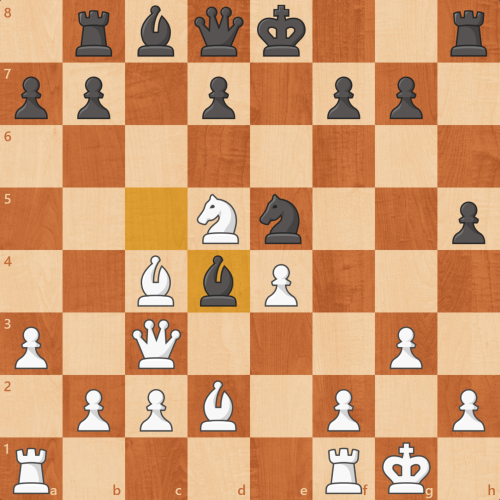 Er, wait… that move makes no sense. Doesn’t it simply blunder the bishop? I examine the board and determine black’s bishop on d4 is unprotected by any of its pieces. “Oh,” I think to myself, “this must be MadChess’ limit-strength algorithm kicking in. The engine is making an idle threat but hanging its bishop. This is well within the 400 centipawn blunder it may play once every nine moves or so.” I capture the black bishop via 20. Qxd4. 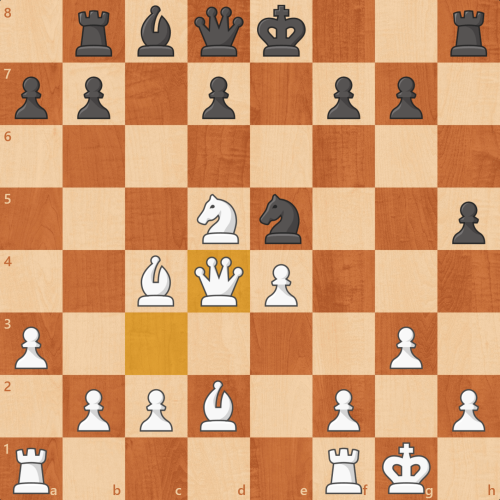 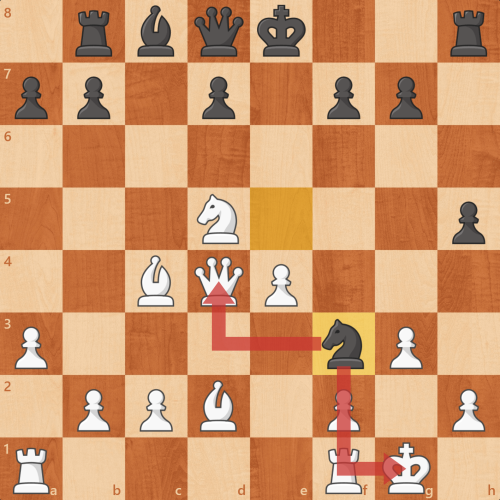 I walked into that trap. I played on hoping MadChess would blunder some material back to me, leveling the game. But it was I who made further mistakes. I resigned after black’s 33rd move forked another of my pieces.

To correct this problem, I need to code less and play more.

After the game I gave Komodo Dragon, a world-class chess engine, two seconds per move to analyze the game. See the full game, with Komodo’s suggested improvements, below.

MadChess 3.1 participated in a tournament Graham Banks arranged, named Into The Void.

This is MadChess 3.1’s debut tournament. As a fan of Black Sabbath, I must say I approve of the name of the tournament. 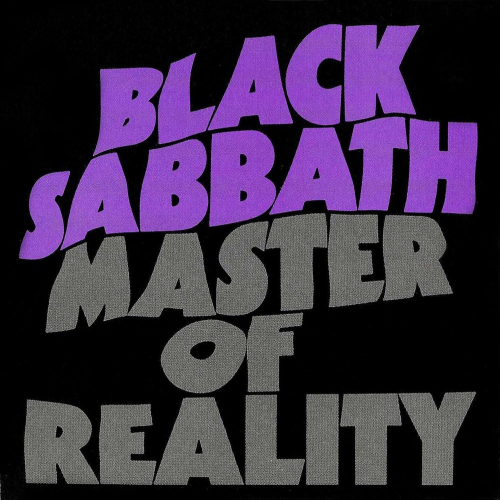 “Leave the earth to all its sin and hate.”