I was up late last night playing chess online. Man, chess is a difficult game. It requires a humble attitude in order to accept losses and invest in the play and study time necessary to gradually improve. Which I’ve not done because I keep tinkering with my chess engine (a programming pursuit) instead of working on my game. Anyhow, after getting my ass handed to me online, I thought I’d spend time today to write a blog post about recent news that shocked the chess world.

Last month, Magnus Carlsen was in Madrid, Spain where the Candidates Tournament was held. As the current chess World Champion, he wasn’t playing in the tournament, he was just- I don’t know- hanging out. The winner of the Candidates will challenge Carlsen next year for the title of World Champion. Well, chess fans hoped so. As we learned shortly after the Candidates, Carlsen decided, for reasons I don’t fully understand, not to defend his title. But that’s not the news I’d like to write about.

Let me explain. I read an interview of Swedish WFM Anna Cramling in which she stated, in response to a question about supporting women in chess:

I think that when girls see other girls playing chess, or women playing chess, this stereotype that “girls don’t play chess” kind of disappears. Girls will think, “Oh, that looks cool. I want to do this too. How do you do this? Show me!”

Right on! There is no better role model for women in chess than Judit Polgár.

Magnus Carlsen is, arguably, the strongest chess player the world has ever seen. A case can be made that perhaps Garry Kasparov or Bobby Fischer, in their prime, were stronger players than Carlsen.

There is no debate, however, about who is the strongest female chess player. It’s Judit Polgár, no contest. No other woman has come close to her accomplishments. She is retired now. However, in the early 2000s, she was among the strongest players in the world competing in the highest-level tournaments. She reached a peak rank of 8th best in the world.

Let me put in perspective for you the stratospheric level of chess Polgár and Carlsen play. I’m struggling to win games way down in the patzer territory of an 800 Elo rating. Judit Polgár and Magnus Carlsen have peak ratings of 2735 and 2882 respectively. Roughly speaking, a 100 point gap in Elo rating indicates the weaker player has a 36% chance of winning a game. 200 point gap = 24%, 400 point gap = 9%, 800 point gap = 1%, gap between Carlsen and me = I have no chance to win.

In the 2000s, Judit Polgár was competing against men in a game of intelligence. Defeating them. Dealing with their chauvinistic attitudes. One example:

At Linares 1994, Polgár lost a controversial game to the World Champion Garry Kasparov. The tournament marked the first time the 17-year-old Polgár was invited to compete with the world’s strongest players. After four games she had two points. During her game with Kasparov in the fifth round, Kasparov gradually outplayed her and had a clear advantage after 35 moves. On his 36th move, the World Champion reportedly changed his mind about the move of a knight, and moved the piece to a different square. According to chess rules, once a player has released a piece, the move must stand, so if Kasparov did remove his hand, he should have been required to play his original move. Polgár did not challenge Kasparov in the moment, because, she stated, “I was playing the World Champion and didn’t want to cause unpleasantness during my first invitation to such an important event. I was also afraid that if my complaint was overruled I would be penalized on the clock when we were in time pressure.” She did, however, look questioningly at the arbiter, Carlos Falcon, who witnessed the incident and took no action.

The incident was caught on tape by a crew from the Spanish television company PVS, and the videotape showed that Kasparov’s fingers had left the knight. Tournament director Carlos Falcon did not forfeit Kasparov when this evidence was made available to him. As U.S. chess journalist Shelby Lyman pointed out, in the majority of sports “instant replays” do not overrule a referee’s original decision and chess is no exception. At the time the video had not been publicly released, at the request of tournament sponsor Luis Rentero, but it is now available on https://www.youtube.com/watch?v=aw4g3iDrsNk. At one point Polgár reportedly confronted Kasparov in the hotel bar, asking him, “How could you do this to me?” Following this incident, Kasparov bluntly told an interviewer “… she just publicly said I was cheating. … I think a girl of her age should be taught some good manners before making such statements.”

Yeah, not cool. Now you understand my use of the word girl.

Just to be clear. The above incident involved a former World Champion, Garry Kasparov, not Magnus Carlsen. I’m relating it to illustrate the shit she’s had to deal with when men don’t want to face the fact she is capable of defeating them.

That’s the backstory. Now, what happened in Madrid last month?

Magnus is hanging out in a park near the Candidates tournament. He’s playing games against chess hustlers, local Spanish players, and chess fans who realized the World Champion was nearby and willing to give anyone a game. He’s cool like that. Who walks up to the table and asks Magnus for a game? You guessed it, Judit Polgár.

What will happen? See for yourself.

Booyah! She’s incredible. I like when Magnus realizes he’s in serious trouble, is determined to find a way to defend, and says to the onlookers, “No applause yet. I’m going to find it.” Or maybe he says, “I’m going to fight.” When he realizes it’s hopeless, he offers his hand in resignation to Judit.

Now you know something about Judit Polgár. Share it with others, because her story is inspiring. You can gain the listener’s attention by beginning with a quote from a Grandmaster, who recalled Judit Polgár beating him when he was an established player and she was just a child. Who is Judit Polgár? He described her as:

This cute little auburn-haired monster who crushed you. 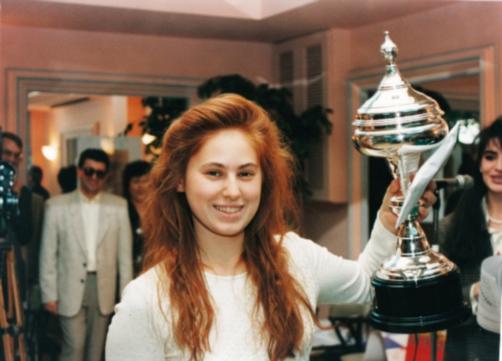