Rather than repeat myself, I’ll explain my recent code update by copying the text of my Pull Request #10 here:

This speeds up resolution of pseudo-legal moves to legal moves by eliminating unnecessary calls to Board.IsSquareAttacked(kingSquare) in Board.IsMoveLegal method. Its benefit is limited though because many pseudo-legal moves never are examined for legality because a beta cutoff occurs before the move is searched.

Eliminated unnecessary call to Board.PlayNullMove and Board.UndoMove in Board.IsMoveLegal method. Instead of actually making a null move, the code flips side-to-move, sets a few other properties of the position, calls IsSquareAttacked(kingSquare), then restores original property values.

I experimented with eliminating the remaining call to Board.PlayMove and Board.UndoMove in Board.IsMoveLegal method to determine if this speeds up resolution of pseudo-legal moves to legal moves. I did this by intersecting pre-calculated moves from the destination (To) square to the opponent king. And by detecting pieces pinned to the opponent king by own sliding attackers. Moving such pieces in a direction other than the attacking ray creates a discovered check. Unfortunately, this code was slower than simply moving the piece and calling Board.IsSquareAttacked. Board.IsSquareAttacked uses pre-calculated moves (magic bitboards) to determine if own king is attacked after moving the piece, constituting an illegal move. Did not include in this PR.

Also, I experimented combining legality checking with playing a move in a Board.PlayMoveIfLegal method. Unfortunately this causes numerous complications with futility-pruned moves. MadChess never prunes moves that deliver check, moves aren’t known to deliver check until they’re played, so this must be detected after the fact (which complicates undoing the move and restoring board state) or detected prior to playing the move (which already has been proven slower). Ugly and prone to bugs. Did not include in this PR.

Also adjusted how nodes are counted- affecting Node Per Second (NPS) metric- to a more honest measurement. A node is counted only in…

I improved MadChess 3.0 Beta’s Principal Variation Search (PVS) by consolidating two separate re-searches into one. In addition, I changed the null move implementation so it reduces the search horizon more aggressively if the current position’s static score far exceeds beta.

I simplified the code to a single re-search.

This increased the playing strength of MadChess 3.0 Beta by 20 ELO.

Watching The Queen’s Gambit on Netflix nudged me to play chess online. I’ve spent time on chess over the last few years… programming an engine, not actually playing. I’m very rusty. Though my puzzle rating is decent. It’s much higher than my game rating, suggesting I need to work on time management. Thinking fast is not my strength, but everyone online plays blitz or bullet so here goes nothing…

Last night I joined a bullet tournament with a 2+1 clock. Each player has 2 minutes to make all their moves in the game, plus 1 second added to their clock after each move. Many of the games I played were blunder fests. But I managed to play solidly in a few. Here’s a well played game considering I’m making most of my moves in like 2 or 3 seconds. I play white (DamageInkk). Afterwards I had MadChess analyze the game. Converting a “won” game is not inevitable for a patzer like me, especially with the time pressure, so I was glad to do it and glad to see MadChess confirm I played accurately from move 16 on.

I like the checkmate configuration at the end of the game: My opponent chases my pawn, walking right into a discovered check / pawn promotion mate.

A knight positioned on an outpost controls opponent territory, restricting movement of the opponent’s pieces on the opponent’s side of the board. An outpost is defined as a square on the fifth or sixth rank, occupied by a minor piece (usually a knight), supported by its own pawn, and positioned such that it cannot ever be attacked by an opposing pawn. In other words, the opponent has no pawns on the neighboring files, or if the opponent has pawns on the neighboring files, they’ve advanced even with or beyond the outpost square.

Controlling board space- especially central squares- provides room to maneuver pieces. It cramps the opponent’s position, who will have difficulty bringing pieces out from behind their pawns. And it enables a quick redeployment of pieces from one zone of action (queenside, for example) to another zone of action (kingside) to initiate an attack or muster a defense around the king.

Be careful not to overextend when grabbing space. In the following position, white appears to control more space than black. Black’s counterplay demonstrates, however, that white merely occupies space but does not control it. 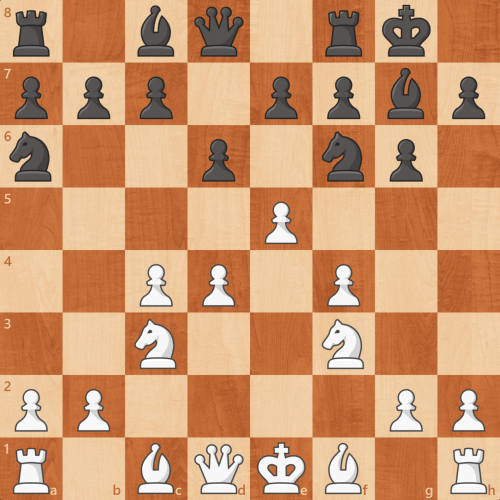 Black moves his knight to safety (and attacks the e5 central square) then takes advantage of white’s greediness.