I became fascinated with the game of chess when I was a teenager.  My parents enrolled me in a park district chess club, so I could receive instruction and play a few games. In addition to chess club, I’d play occasionally against friends. However, I did not have a reliable lineup of opponents always ready to play a game. So I decided to save my money and buy a chess computer. In 1993 I bought the Saitek Kasparov Olympiad. 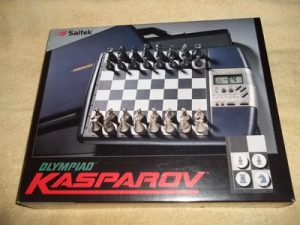 Playing against it definitely improved my game. But I never could defeat it on level four or higher (searching ahead four moves).

Recently I found the Saitek chess computer in my closet. I put in a fresh set of batteries and flipped the power switch. It came to life. A thought occurred to me: I should try once more to defeat the computer, on the dreaded setting, level four. Only this time I won’t compete directly against the computer. My creation, MadChess, will decide my moves. If MadChess can defeat the Saitek, I’ll consider it a victory for me. After all, the MadChess software represents my powers of concentration and intelligence.

I’ll play a ten game match between MadChess 1.2 and the Saitek Kasparov Olympiad chess computer. I’ll handicap MadChess by allotting it very little time to make all of its moves, and disallowing it access to an opening book (a list of optimal moves at the beginning of a game).

Here is the first game:

The Saitek computer took fifteen minutes or more to make a move in the early and middle stages of the game. MadChess moved in a few seconds. Despite the severe time disadvantage, MadChess destroyed the Saitek computer. The game was over just a few moves after it began. You may review the game using the chessboard above. I have inserted the analysis of Shredder 12, a strong chess engine. Shredder indicates where Saitek or MadChess blundered- that is, played a move that was inferior to the best move by a margin of a pawn or more.

Considering the swiftness of its victory, I have decided to increase the time handicap imposed on MadChess. I will force it to make every move in exactly one second. The Saitek computer may use as much time as it needs to search ahead four plies.

Because I am adjusting the match time control, I have labeled this “Game 0.” Consider it a practice game that does not count toward the final score. The match begins anew tomorrow. This should be interesting.